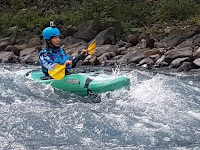 Name: Laura Morrish (Committee Member)
Background: I first had a go at kayaking when I joined the Scouts county activity team.  My main role in the team was to do with horse riding and rock climbing, but I was always willing to lend a hand in other outdoor pursuits.  After around 6 months on flat water I had my first taste of white water in my recently acquired boat.  Taking a swim on a very cold day in Wales, made me decide to sell the boat (to Keith no less), and give up on the whole thing.  Little did I know that a few years later I would meet up with Keith again, and decide to give the kayaking thing another try with the club.


I’ve now been paddling again for a few months, overcoming the fear that had settled in to mind about white water, and with a lot of help and encouragement from the club I’ve made huge progress.  I’m now river running at Grade II, and testing myself in Grade III at times.  Although I still find ‘playing’ in waves a little nerve wracking!


Qualifications: 3* Kayak, REC Level 2 First Aid (+AED)
Aspirations: Getting my roll sorted and then moving on to start some coaching!

Ideal Paddling day: A nice Grade II run in the sunshine with friends

Background: I first (properly) had a go in a kayak at one of WFCC’s pool sessions, my girlfriend asked me to come and give it a go, and upon arrival I was told “it’s addictive you know” and that was it, 2 years later and I am still hooked!

My first paddle on a river was at Symmonds Yat where I managed to drink half of the river Wye, since then I have done a fair bit of paddling mostly in north wales and with two trips to the French Alps ranging between grades 2-4

Aspirations: I would like to get some coaching qualifications under my belt, when time permits